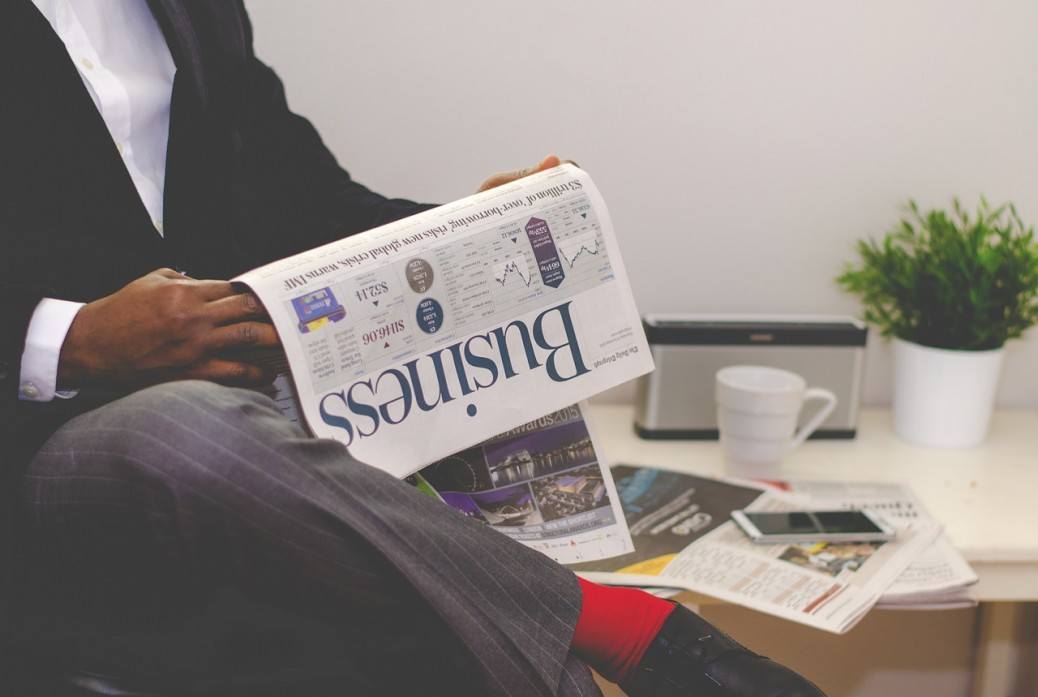 Organisational Improvement as a field of study has had a number of important developmental points. Based on the success of Japanese organisations post Second World War, widespread recognition of W. Edwards Deming, Walter Shewhart , Joseph Juran and other theorists of organisational improvement emerged. The subsequent focus on what underpinned the successful performance of the Japanese brought to light the fundamental principles and cultural attributes instigating their success, in particular, the notions of continuous improvement and learning. Whilst there was a larger, systemic philosophy of Organisational Excellence being promoted, the systematic drive for improvement within an organisation was seen as a key mechanism for change that delivered measurable improvement.

Over time it became apparent that the synergy of both Lean and Six Sigma methodologies offered organisational practioners a more powerful tool set. Lean methodology encouraged an examination of the factors inhibiting the flow of work in terms of the degree of non value add work or waste. In this way the methodology encouraged a holistic view in order to optimise value streams. Six Sigma, a statistical-based methodology, focused on reducing the mistakes made in the work produced for internal or external customers – the most costly form of waste. Applying both methodologies provided a more valuable and comprehensive improvement framework and the application of Define, Measure, Analyse, Improve and Control (DMAIC) as a phased model for guiding improvement project work became de rigueur.

The popularity of the methodology for improvement was enhanced by the widespread reporting of the benefits of its application particularly in financial terms. Antony and Banuelas (2002:21) reported that 75% of the companies they studied had gained benefits in the order of a $1 billion or more. They reported the impact for Motorola (1987 to 1994), General Electric (1995-1998) and Allied Signal (1992-1996). Their findings showed that Lean Six Sigma accentuated financial returns to the balance sheet of an organisation. In 1999, General Electric Company spent over half a billion in Six Sigma initiatives and received over two billion in benefits for the fiscal year (Linderman, et al., 2002). Measures of Success ranged across all aspects of the Balanced Scorecard. This focus on achieving people, productivity, customer and financial benefits continued to drive a worldwide interest in the field.

Managers from organisations have completed Lean Six Sigma Projects as part of their certification studies at the University of Technology Sydney and the Lean Six Sigma Business Excellence Institute. The portfolio of work supplied must meet rigorous standards including the verification of any results that indicate the annualised return on investment. The graph below shows the results reported from a recent sample of completed projects. As can be seen many projects report a return over half a million annually. These projects range in scope so that even smaller scale projects report quite large returns. 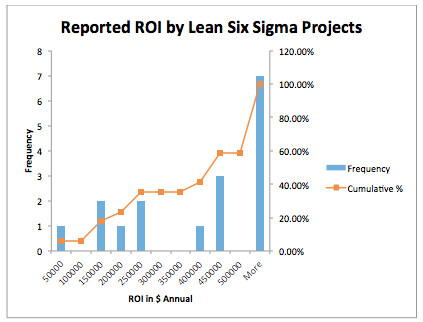 In addition the graph below shows the percentage improvement reported in projects on the basis of the gains made on the baseline measures used in the projects. As can be seen, individual projects can make a significant contribution to an organisation. The large bulk of projects are achieving % gains of 40% or more and contributing a significant ROI.

Peer reviewed Journals in the field continue to report significant improvements across a wide range of industries.

The Finance and Banking sector including the Insurance sector have been applying Lean Six Sigma methodology for some time. Kumar etal (2008) describes the reduction in time taken during the credit initiation process for corporate credit card customers by 25% from 20 days to 15 days by a major US Financial Services company. They also cite the estimated $2 billion in benefits that the Bank of America achieved over a period of time in the application of the methodology.

Chaplin and O’Rourke (2013) discuss the application of Lean Six Sigma in the Food Industry. They report one project focusing on waste reduction delivering 1.5million pounds to the bottom line and another project dealing with production ‘give aways’ delivering a reduction in $75 thousand pounds worth of ‘give aways’ annually.

Teneraa and Carneiro (2014) describe the application of Lean Six Sigma in a Telecommunications context to improve Project Management processes.

In the Health Care sector improvement efforts have been made in such areas as surgery, paediatrics, drug development and emergency department operations such as patient waiting times. One example is that of Bender etal (2015) who report on Operating Room efficiency using Lean Six Sigma. Some of the results reported (p209) include:

These examples from peer reviewed journals are a very small sample illustrating the continued reporting of benefits of the application of the organisational improvement methodology known as Lean Six Sigma across a wide range of settings.

If you are interested in learning more about this methodology and related tools you are most welcome to come to the information evenings being held about the UTS Green Belt and Black Belt Courses.

Podcasts on these courses are available at: https://lssbei.com/overview-of-the-whole-blackbelt-program/

Leave a reply Click here to cancel the reply

We're not around right now. But you can send us an email and we'll get back to you, asap.

Verify you are a human

Find my RSVP for Event Name

We have email-ed you a confirmation to

Change my RSVP
{"codes":{"err":"Required fields missing","err2":"Invalid email address","err3":"Please select RSVP option","err4":"Could not update RSVP, please contact us.","err5":"Could not find RSVP, please try again.","err6":"Invalid Validation code.","err7":"Could not create a RSVP please try later.","err8":"You can only RSVP once for this event.","err9":"Your party size exceed available space.","err10":"Your party size exceed allowed space per RSVP.","succ":"Thank you for submitting your rsvp","succ_n":"Sorry to hear you are not going to make it to our event.","succ_m":"Thank you for updating your rsvp","succ_c":"Great! we found your RSVP!"}}
Log in with Facebook
or